The Great Mosque of Xi'an was one of the most peaceful places I visited during my 2019 travels in China. An exciting mix of many cultures is evident in Xi'an, which was once the end of the Silk Road. These cultures came together on the ancient trade route connecting East and West overland from Persia and the Arabian Peninsula to China.
Built in 742 AD, the mosque is the largest in China. It is situated in the heart of the Xi'an Muslim Quarter (a vibrant and bustling marketplace). The walled courtyard complex surrounding the mosque provides an oasis of serenity in this otherwise chaotic district.
I've created a large diptych painting titled "Phoenix Pavilion Courtyard," inspired by the intricate stone carvings decorating those courtyard walls. 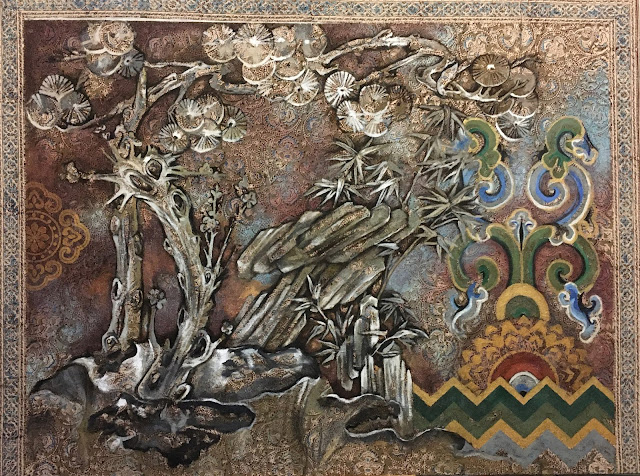 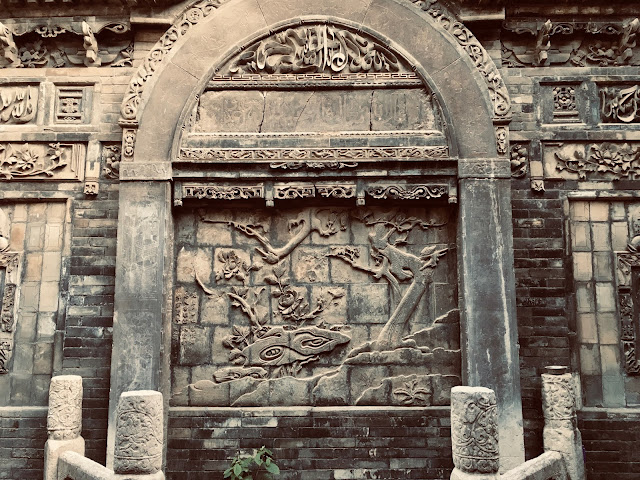 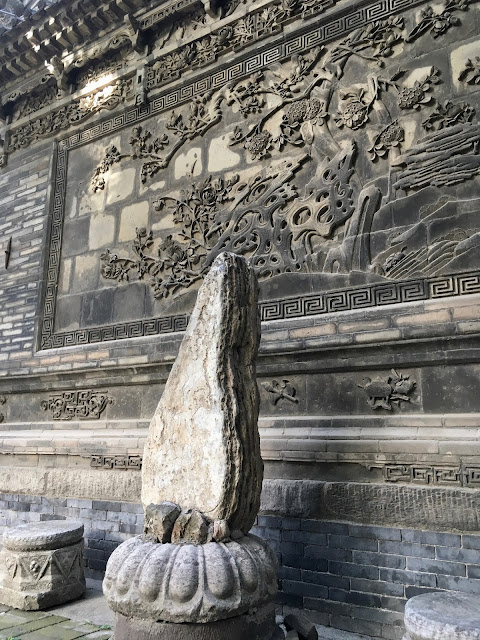 A Gongshi, a porous limestone rock traditionally placed in Chinese gardens, is featured in the foreground of the right panel (shown below). These rocks, sometimes called Taihu rocks, have been appreciated by Chinese scholars since the Tang Dynasty for their perforations, openness, thinness, and wrinkling.

The combination of sharp angular edges, swirling movement, and round holes in this Gongshi reminded me of flames. Perhaps a reference to the burning bush, the rock thrusts upward toward the right which compositionally balances the peony buds and branch reaching downward to the left. 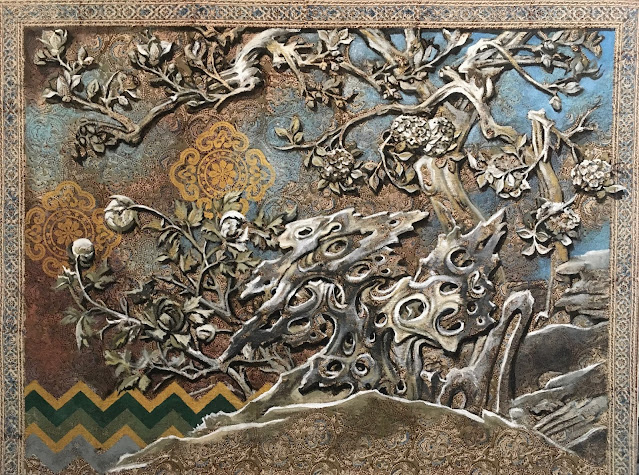 Phoenix Pavilion Courtyard, right panel
Acrylic on Kalamkari fabric
36 x 48 inches
During a 2018 trip to Kolkata, India, I purchased the Kalamkari fabric used as the surface for these paintings. The cotton Kalamkari was hand printed using carved wooden blocks and natural plant based dyes. 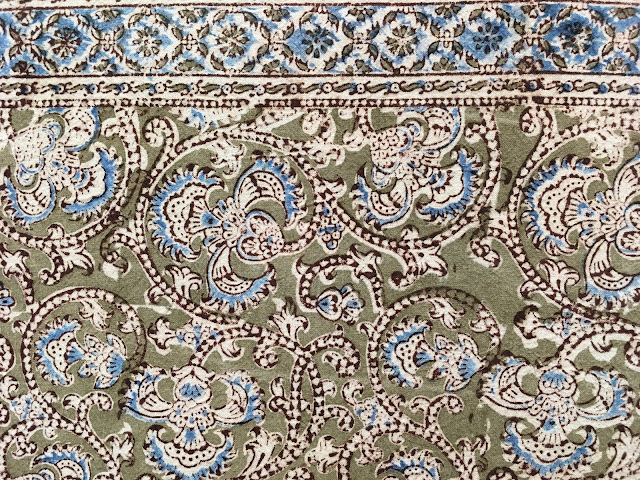 The stylized floral elements in the fabric's pattern design exhibit the influence of Persian and Islamic art in India during Mughal rule.
When both panels are displayed together, one sees a gradual shift from menacing dark red clouds to a cheerful blue sky coming after the dawn.

Phoenix Pavilion Courtyard
Acrylic on Kalamkari fabric
36 x 100 inches when displayed together
The Phoenix Pavilion, a hexagonal gazebo, is the central focal point of the Great Mosque's fourth courtyard. 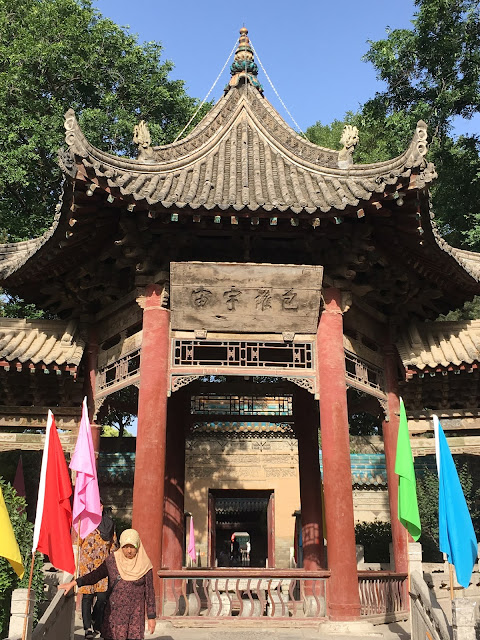 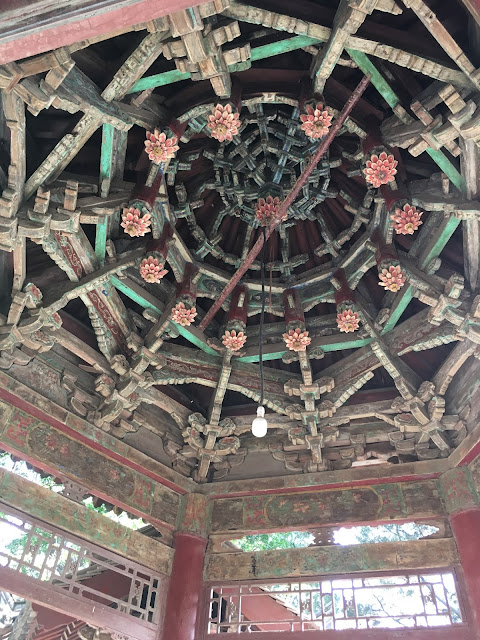 I was fascinated with the pavilion's ceiling beams which had been painted in bright colors which have worn away and faded from exposure. I took cues from this weathered effect when incorporating color into the predominantly neutral grisaille paintings. 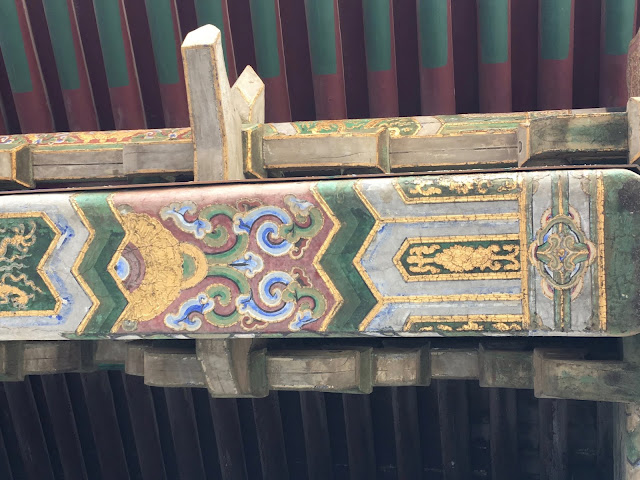 Below are a few details which show more clearly how the patterned fabric shows through the transparent layers of paint and how the imagery echos the fabric's design. Gold, silver, graphite, and bronze iridescent paints subtly highlight the neutral grey tones. 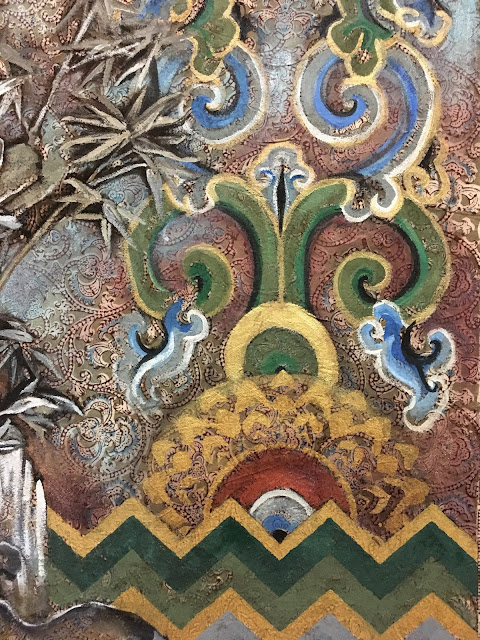 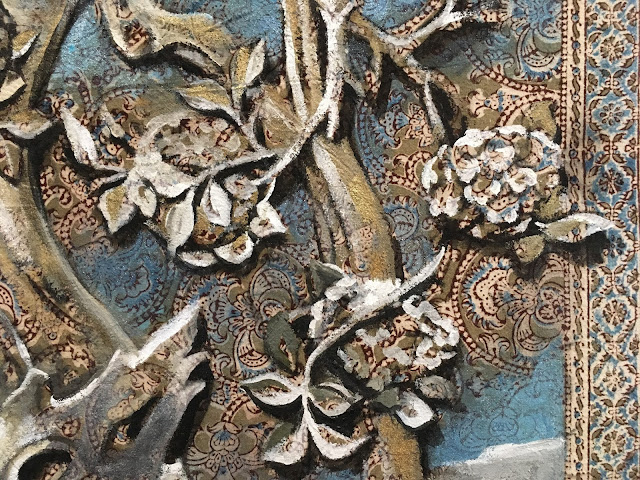 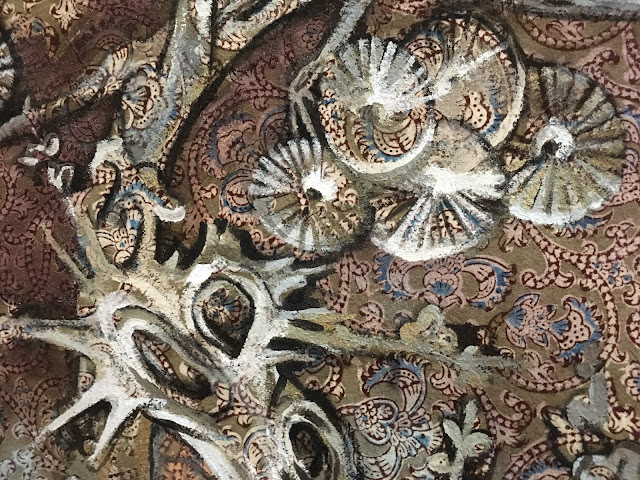 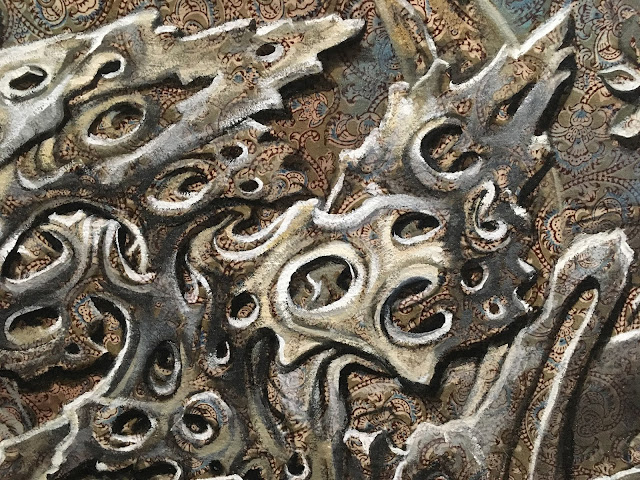 I plan to display these paintings as scrolls hanging on rods which will allow more of the fabric border framing the work to show. I like the contradiction of a soft fabric scroll having no depth appearing as a stone relief sculpture.
Thanks for reading!
Check out my artwork available at my Etsy store, Facebook page, as well as my Instagram feed.

Posted by Cynthia Hayes at 8:41 PM